Someone purchased a Aero Standup Tour Cricket Kit Bag with Wheels $265.00 16 Minutes ago

Someone purchased a Coloured Cricket Batting Pads $115.00 18 Minutes ago

Someone purchased a Kookaburra Crown Cricket Ball $294.00 40 Minutes ago

Someone purchased a Kookaburra Athletic Cricket Brief $15.00 45 Minutes ago

Someone purchased a BL 09 Custom Made Cricket Batting Gloves Pittard Palm $75.00 50 Minutes ago

Someone purchased a Kookaburra Pro 600 Cricket Helmet $80.00 5 Minutes ago

Someone purchased a Kookaburra Pro 5.0 Wheelie Cricket Kitbag $80.00 10 Minutes ago

Someone purchased a Kookaburra Red King Cricket Ball Pack of 12 $480.00 18 Minutes ago

Someone purchased a CEAT Secura Cricket Abdo Guard $10.00 25 Minutes ago

Someone purchased a TON Power Plus English Willow Cricket Bat $200.00 42 Minutes ago

Someone purchased a Adidas Incurza 2.0 Cricket Batting Gloves $90.00 35 Minutes ago

Someone purchased a Newbery Personal Cricket Carry Bag $35.00 40 Minutes ago

Although BJ Watling failed to open his account in the only innings he batted, getting castled by a peach of a delivery from Indian pacer Mohammed Shami, he was outstanding behind the stumps, pouching as many as five catches during the match. The fact that he took three of those catches in the second innings despite having a dislocated right ring finger made his performance even more creditable.

Brave as his decision to take to the field on the reserve day despite the injury was, it was not surprising. Throughout his career, Watling epitomized the never-say-die spirit. He was a quintessential Kiwi cricketer who always kept his team’s interests ahead of his own.

The South Africa-born player bowed out as arguably New Zealand’s greatest-ever wicket-keeper, with records of most Test caps (67) and most Test dismissals (265) to his name. In fact, only eight other stumpers in the history of cricket (Mark Boucher, Adam Gilchrist, Ian Healy, Rod Marsh, MS Dhoni, Brad Haddin, Jeff Dujon and Alan Knott) have more Test dismissals than him. 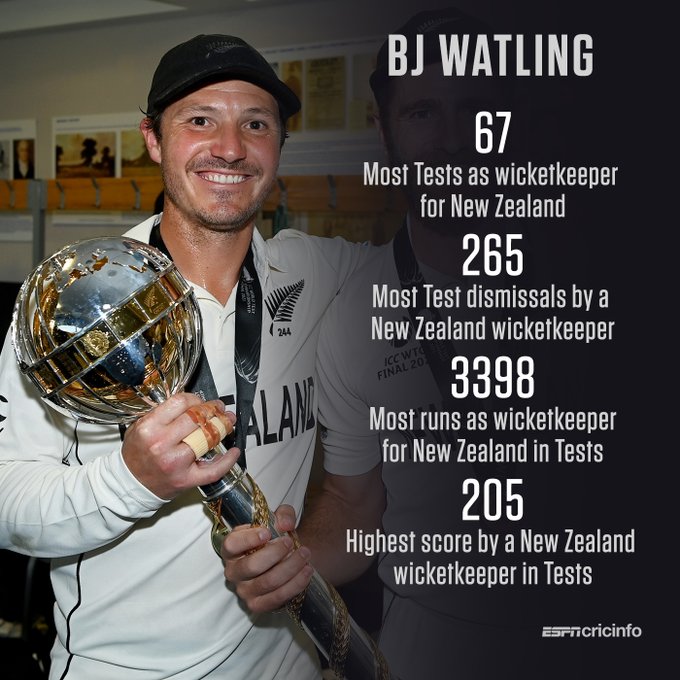 Watling was not about exemplary glovework alone. He will be most remembered for his rearguard knocks that pulled the Kiwis out of the woods on several occasions during his long career.

He conjured his first memorable rearguard masterclass in a Test against India in Wellington in 2014. Although the game is more famous for Brendon McCullum’s triple hundred (the first-ever triple century by a New Zealander), Watling’s innings deserves a mention as well.

After conceding a mammoth 246-run first-innings lead, the Kiwis were staring in the face of an inevitable defeat as they were reduced to 94 for 5 in their second outing on the morning of Day 3. It was at this stage that Watling came out to bat, and then in the company of skipper McCullum, added 452 runs for the sixth wicket to save the game for his side. For his marathon knock of 124 that day, he had faced 367 balls.

Cut to 2018 and the doughty wicket-keeper fashioned another unforgettable rescue act for his country against England in the second and final Test at Christchurch. In reply to England’s first innings total of 307, New Zealand were tottering at 36 for 5 before Watling dug deep and scored 85 off 220 balls to help the hosts reach 278. He had batted like a rock at one end, besides inspiring Colin de Grandhomme (72) and Tim Southee (50) to play freely from the other. The game eventually ended in a draw, with the Black Caps clinching the series by a 1-0 margin.

Later in the same year at the same venue, he was involved in another rearguard show when Sri Lanka had the home side reeling at 64 for 6 in the first innings. This time, he scored only 46, but his 108-run stand with Southee took New Zealand to a respectable total of 178. The Islanders, in reply, were shot out for a meager 104, and the Kiwis went on to win the match by a huge margin of 423 runs.

Watling’s highest score of 205 (his only double ton in Tests), which came against England at Mount Maunganui in 2019, was also a fighting knock. New Zealand were 127 for 4 in reply to the visitors’ 353 when he walked out in the middle. For the ensuing 667 minutes, he remained an immovable force and helped his team secure the kind of lead that was enough to force an innings defeat on England.

The 35-year-old proved his mettle in the away Tests as well. Watling's patient 59 in the second innings of the Abu Dhabi Test against Pakistan in 2018 steered New Zealand to a nail-biting four-run win over their opponents. During the 2019 tour of Sri Lanka, he scored a magnificent 105 on a rank turner to fashion his team’s series-levelling victory in Colombo.

Watling’s contributions both as a batsman and a wicket-keeper were at the heart of New Zealand emerging as a force to be reckoned with in Tests in recent years. He was his team’s go-to man in moments of crisis. His presence both behind and in front of the stumps will be sorely missed.

Farewell, BJ Watling. Your cricket career is over, but your legacy of grit and determination will live on.