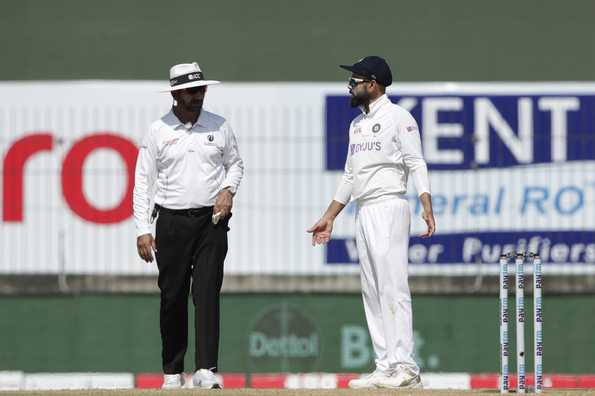 The 'wicket zone' will now be increased to the top of the stumps. © BCCI

The ICC Cricket Committee led by former Indian captain Anil Kumble, on Thursday (April 1), backed the much-debated Umpire's Call and said that it would remain in the game. The board, however, has approved changes to the way LBW referrals will be judged under the Decision Review System (DRS).

In the recent past, the 'Umpire's Call' had come under scrutiny, with Virat Kohli suggesting that it was 'creating more confusion' and urging the ICC to simplify the game.

In a newly approved decision, the ICC board has agreed to increase the height of the 'wicket zone' - the area of the stumps the tracking technology must show the ball to be hitting for an on-field not-out call to be overturned - to top of the bails. Earlier, the zone was restricted to only the bottom of the bails, wherein the deliveries just shaving the bails returned an 'Umpire's Call' verdict, which in turn was enough to retain the review but not overturn the on-field call.

Additionally, the fielding side can now also check with the on-field umpires if they think the batsman offered a shot before deciding to take it upstairs.

"The principle underpinning DRS was to correct clear errors in the game whilst ensuring the role of the umpire as the decision maker on the field of play was preserved, bearing in mind the element of prediction involved with the technology. Umpire's Call allows that to happen, which is why it is important it remains," Kumble reasoned.

Meanwhile, the third umpires will now check all calls of short-run and correct any error noted before the next delivery is bowled.

The committee has also decided that the interim COVID-19 regulations introduced last year to ensure the resumption of international cricket would continue to be in place.

Two changes were also approved to the playing conditions for Women's ODIs, where in the optional five-over batting powerplay have been eliminated and all tied games will now be decided by Super Over.

The games at the 2022 Commonwealth Games, to be held in Birmingham, have been awarded T20I status, while Test and ODI status has been permanently awarded to all Full Member women's teams.

Following "positive discussions" between the hosts board, BCCI, and the Indian government around tax arrangements and visa guarantees for the upcoming global event, the ICC said it is hopeful that the two issues "will be resolved over the next month".

India are due to host the seventh edition of the tournament in October-November 2021, originally slated to be held in Australia in the same window last year but pushed back due to COVID-19.

Starting with marquee event in India, teams at ICC events - both men's and women's - will now be allowed to carry a larger contingent. With the ongoing COVID-19 crisis and the resultant quarantine norms associated with international travel, the ICC has decided to expand the squad limit to 30 from the existing 23 that had a cap on 15 players and up to eight support staff members. Teams can now extend their squads upto 22, or have additional support staff travelling with them.